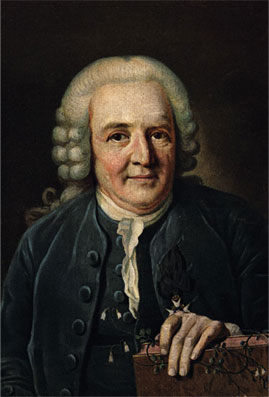 Carl von Linné (Carl Linnaeus) was born on 23 May 1707 in Råshult. At the age of 18 months, in 1709, the family moved to the vicarage in Stenbrohult, where his father Nils Linnaeus was vicar.

His father, Nils Linnaeus created his garden in Stenbrohult, and Carl was given a small plot of his own, "Carl's garden", to care for. He was exhorted by his father to remember the names of the plants, as he would otherwise not be able to learn any new names. This meant that Linné maintained "a passionate interest in names" throughout his entire life.

1778 Linné died on 10 January. He was buried in Uppsala cathedral on 22 January
A scrap of paper bearing the inscription: "Nostalgica Stenbrohultis", which means homesickness for Stenbrohult, was found after Linné's death.

In his classification system, Systema Naturae, he divided nature into three kingdoms: plants, animals and minerals. He then further subdivided plants into 24 classes based on the number and arrangement of their stamens. With his Latin system of binomial nomenclature, he created rules governing the naming of the various species in nature. He named 8,000 plants and 4,000 animal species as well as minerals. Linné was extremely inquisitive, and his desire to catalogue, order and name nature would dominate an entire period of scientific history - the Linnaean epoch.

Linné was not merely a scientist, botanist, zoologist and geologist, however. He was also a proficient doctor, health promoter and philosopher.